AVR Debugging on Linux (with debugWire)

At the time of writing (beg. of 2016), the old and discontinued JTAGICEmkII seems to be the best supported option on Linux, so I got myself a used one of those. The current Atmel-ICE Basic doesn't seem to work at all with AVaRICE because it uses a completely different protocol. Alternatives to the JTAGICEmkII are the AVR Dragon and possibly JTAGICEmkII clones like the ones from Kee Electronics and Waveshare. While both claim to be fully compatible on Windows, there is no statement on Linux compatibility.

Controllers like the Atmega328P don't support debugging via JTAG because of their limited pin layout - they simply don't have the pins needed to connect them to the debugger via the JTAG interface.
So Atmel has whipped up debugWire, a protocol allowing to debug over a single wire. It is connected to the RESET pin, and it requires to disable the reset function on that pin and enable debugWire, which is done by programming the DWEN fuse.
Please note the warning on programming the DWEN fuse in the manpage of AVaRICE.
While the DWEN fuse is programmed, the RESET pin has no function and thus the controller can't be programmed via ISP until the DWEN fuse is unprogrammed again. This can be done either via high voltage programming, or simply by unprogramming the fuse with AVRDude.

The JTAGICEmkII comes with an adapter from 10-pin JTAG to 6-pin SPI interface. The Quick Start Guide of the JTAGICEmkII, contains useful information on how to connect it.

When connecting the JTAGICEmkII via USB to the Linux PC, 'lsusb' should list it:


4. Compiling the code with debug information

For debugging to work, the code needs to contain debugging information (g2 in stabs format) and it must be compiled without optimizations (-O0).

NOTE: Try compiler options -ggdb, -g and/or -Og (instead of -g2 and -O0) if execution doesn't stop at breakpoints.

As usual, the program needs to be flashed in hex format, which can be created like this:

Setting the bit clock period (-B) to 10 fixed issues with random device signatures for me, probably caused by my suboptimal wiring.

I'm using AVR8 Burn-O-Mat to program and unprogram the DWEN fuse, but of course it can be done on the command line, too.


10. Start a debugging session with GDB

With AVaRICE up and running, it is now possible to start a remote debugging session from avr-gdb:

The last two lines of the output should look like this:


11. Connect to the remote target

To set a breakpoint in for example the function main() in line 77:

13. Start/continue execution until the breakpoint is hit

If execution doesn't stop at the breakpoint, try the compiler options mentioned in point 4.

It may seem a bit clumsy first, but it is a usable workaround: setting permanent breakpoints.

Obviously, the program must be recompiled and flashed. Then, after starting execution with "continue", execution will stop at the breakpoint(s):

The value of "time" in this example can now be examined:

Already quite nice I think!

Jumping to the next line will let the execution continue until it hits the next breakpoint.

Obviously, it still is a shame if it is not possible to set breakpoints during debugging, but I think these permanent breakpoints have an advantage: you can let execution stop at them as often as you want without having to worry about at least two writes to flash done each time.

I might be wrong about this, but I'd actually prefer to think a bit about where to place my permanent breakpoints (and remove them again after debugging) and flash the whole program once, than writing to individual flash memory addresses many times. If the flash is worn out at just one address, the whole part is bricked, right?

Most of the information here is based on the documentation at Debugging- AVR-Eclipse.

You probably already have the "Eclipse IDE for C/C++ Developers" installed already.


2. Set up JTAGICEmkII as programmer

In the properties of your project, go to AVR -> AVRDude and create a new Programmer Configuration.

Give the configuration a name and select "Atmel JTAG ICE mkII in ISP mode". No particular settings have to be made. 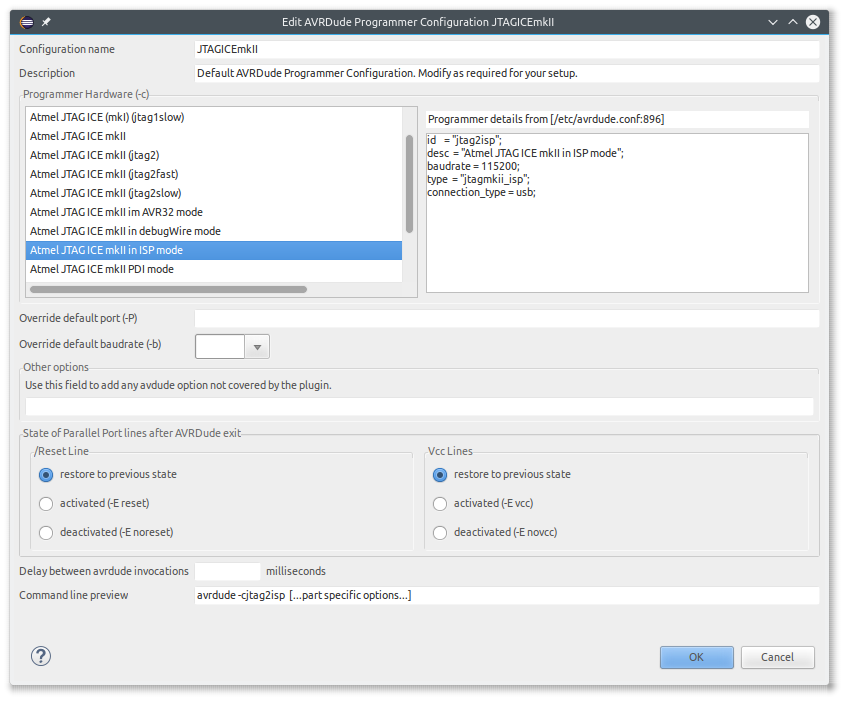 Go to AVR -> Target Hardware and at MCU Type, click "Load from MCU". This should succeed without error - nothing obvious happens. 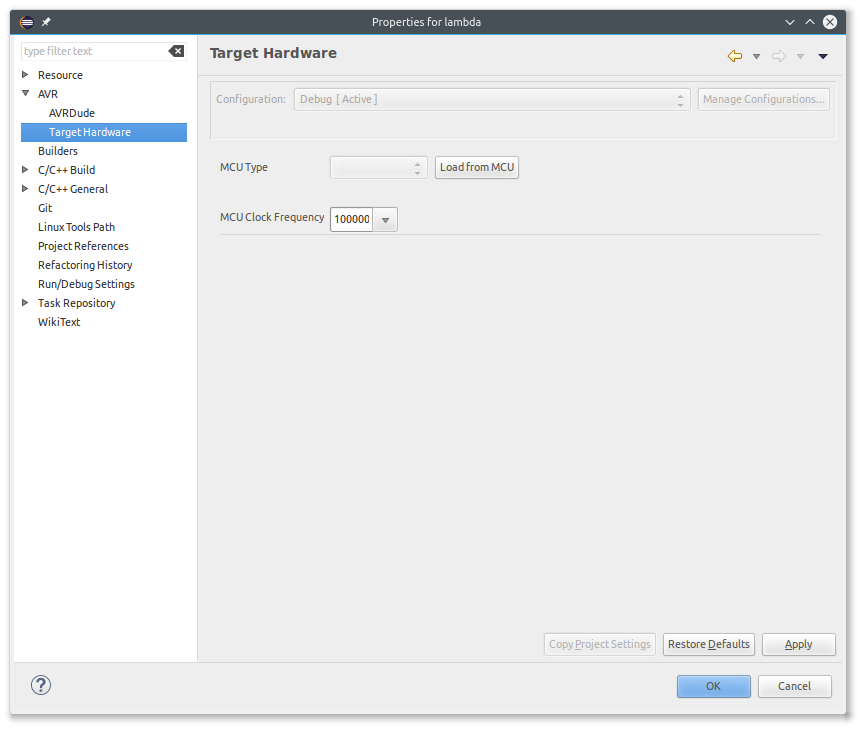 Go back to AVR -> AVRDude. The AVRDude command line preview should now include the correct device. I set a bitclock of 10, which fixed issues with random device signatures for me, probably caused by my suboptimal wiring. 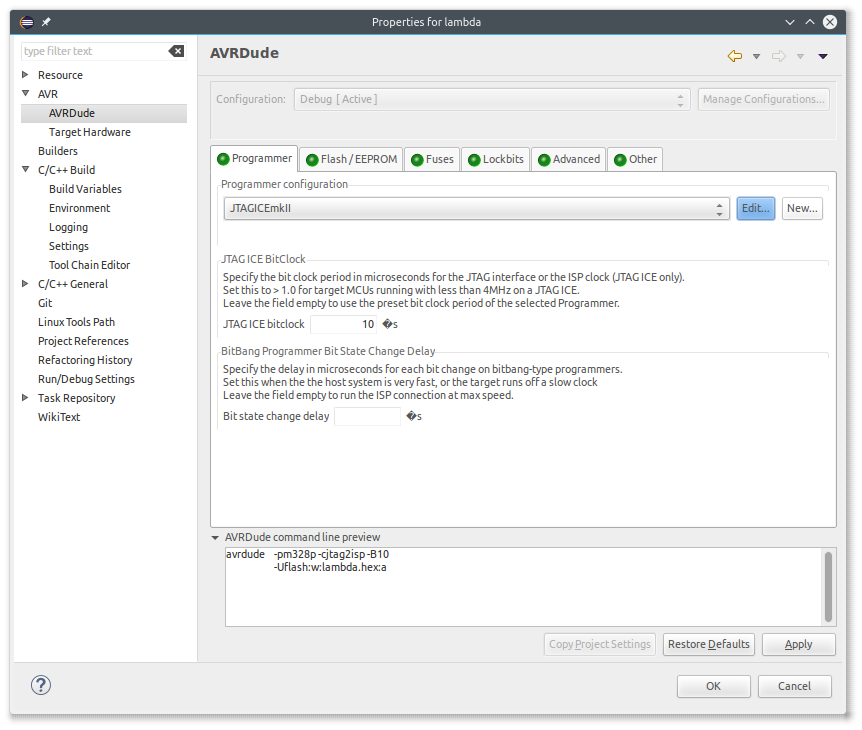 Eventually, uploading the program should work by invoking the


3. Set up the Debug Configuration

In the properties of your project, go to C/C++ Build -> Settings. 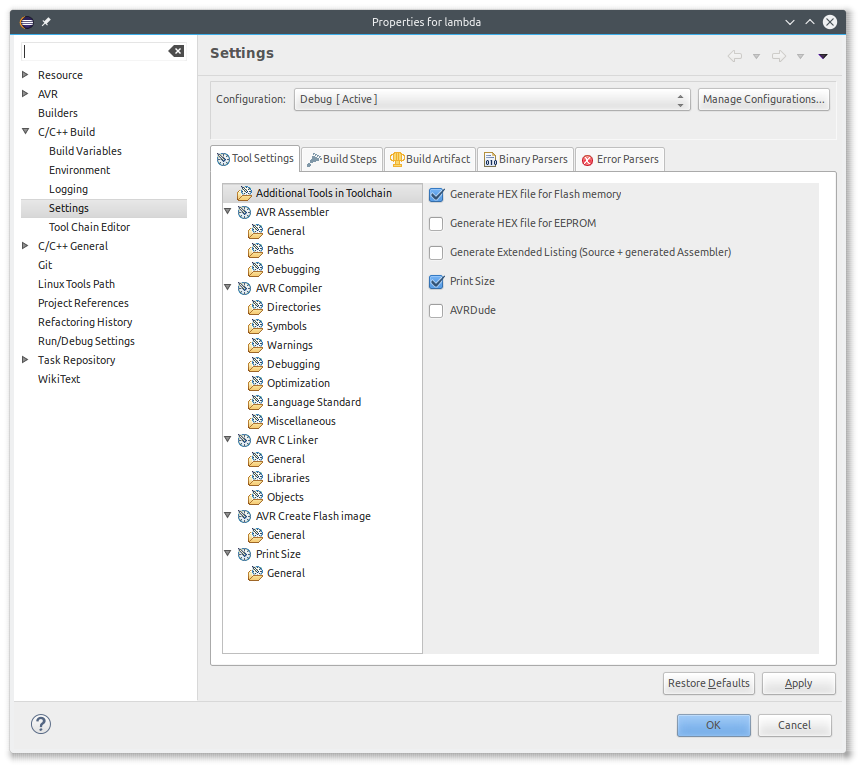 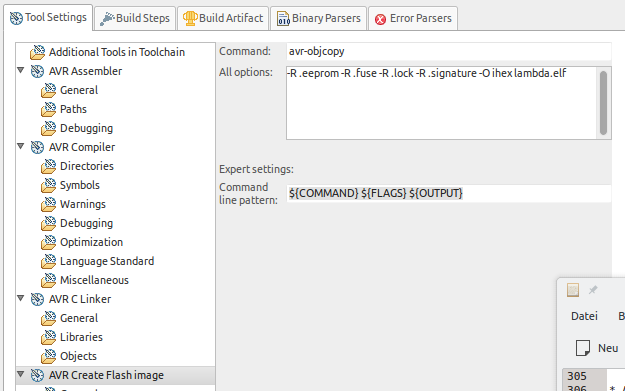 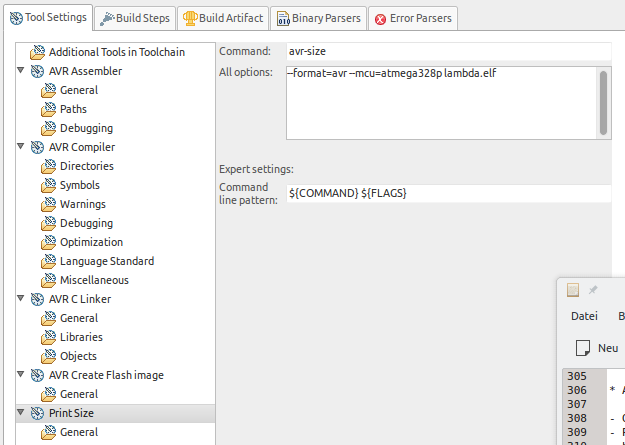 Now it should be possible to make a debug build of the project.

That should be just a matter of clicking the


6. Program the DWEN fuse (if not done already)

The DWEN fuse can be programmed with for example AVR8 Burn-O-Mat. 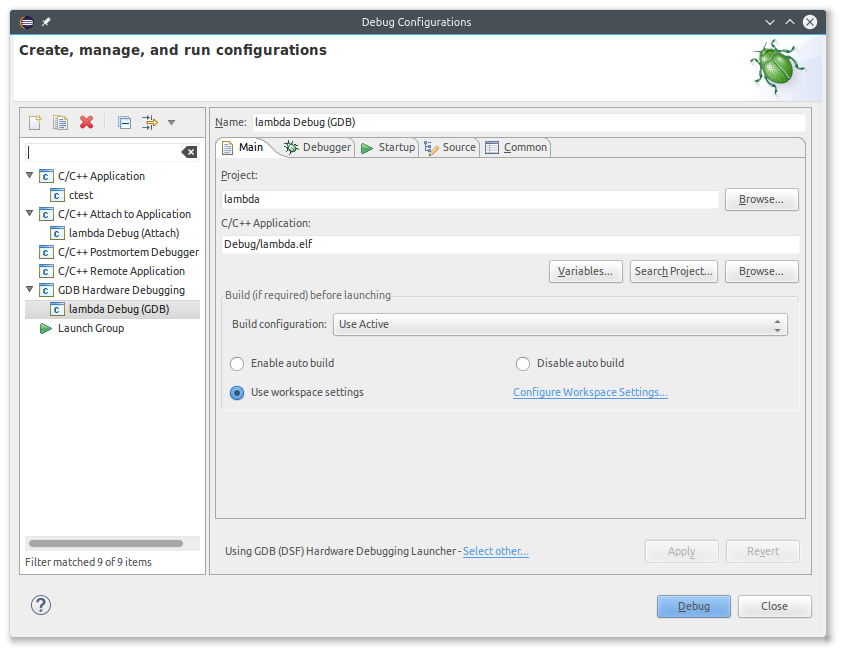 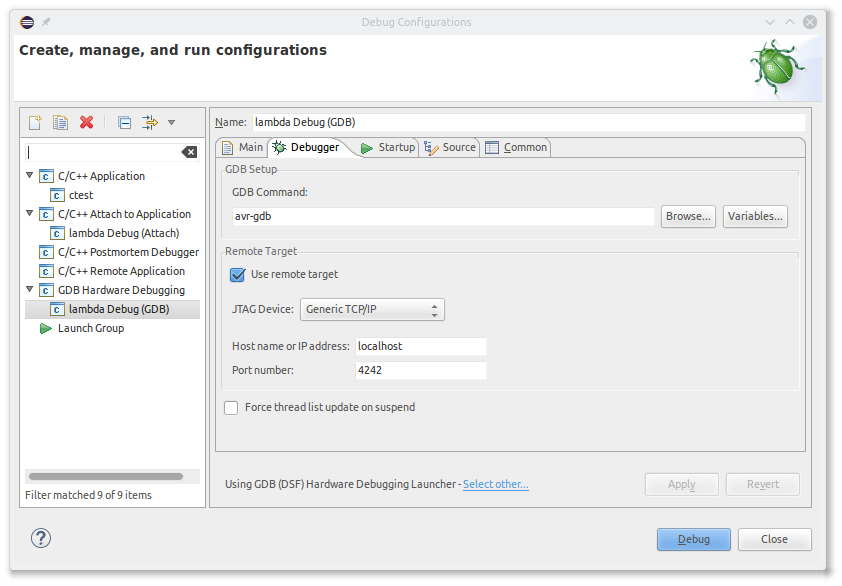 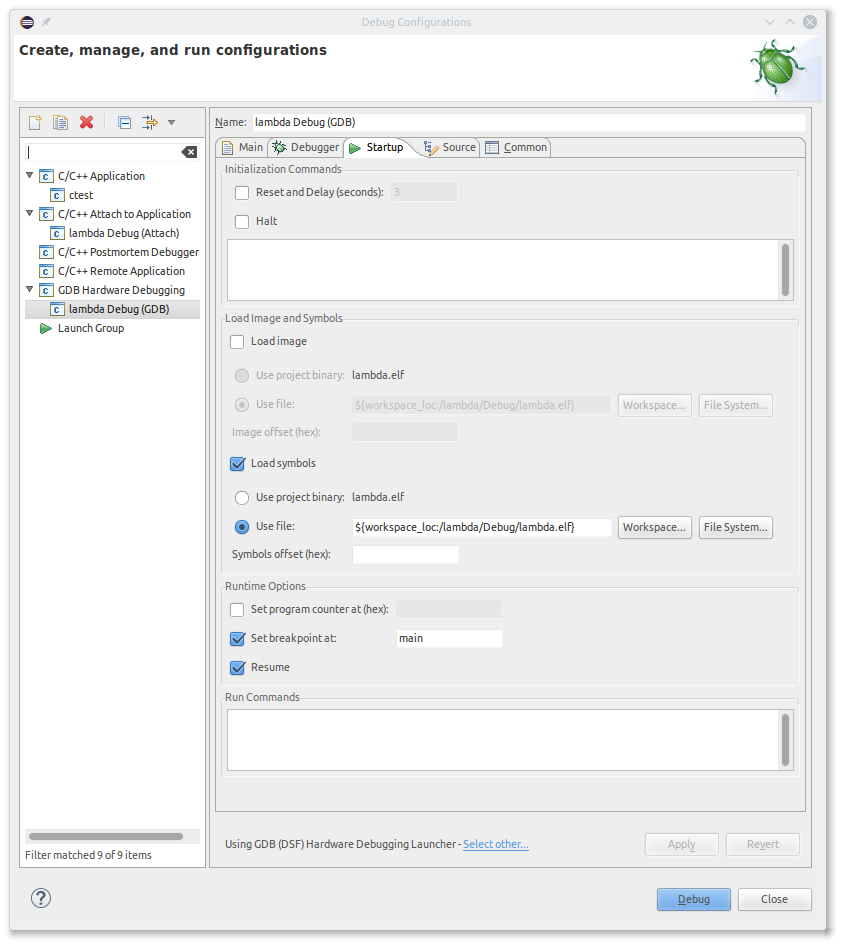 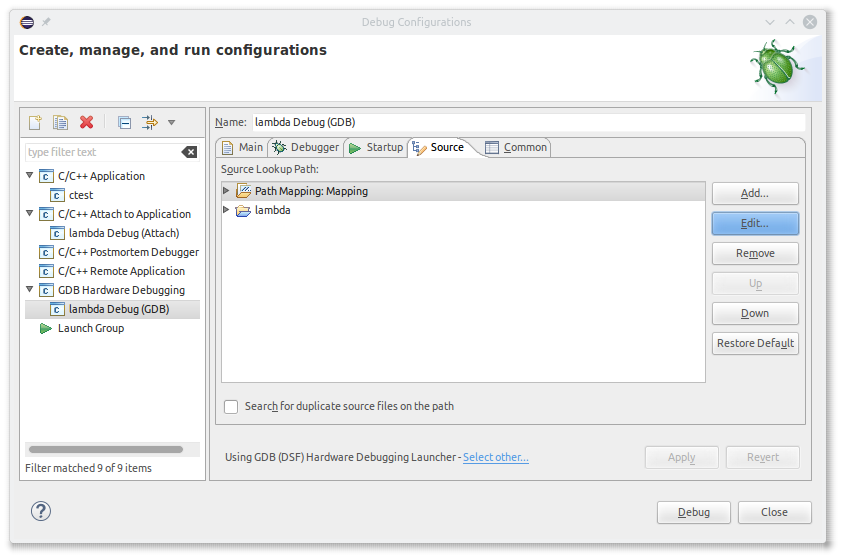 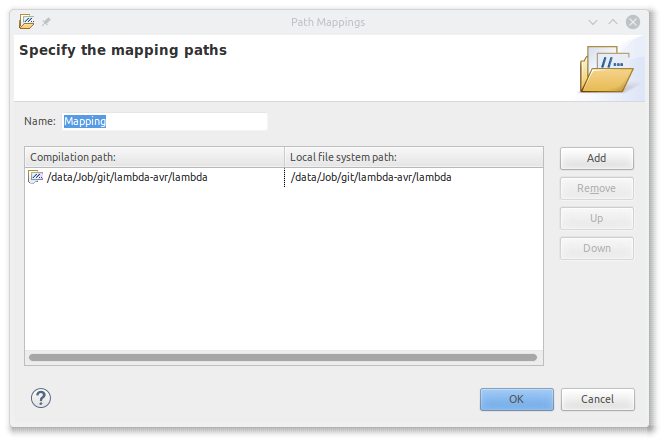 This actually can be done from Eclipse as well. Check Debugging AVR-Eclipse on that.

I prefer to just start it on the command line:

The debugging session should start and execution should stop at the entry point of the main() function. If not, "14. Workaround for execution never stopping at breakpoints" describes a possible workaround. By setting a permanent breakpoint, execution stops at the requested point:

In order to continue execution, invoking Resume (F8) or Step Over (F6) unfortunately won't do it, but it is possible to jump to the next line by typing

in Eclipse's Console and execution continues.

Don't forget to remove all permanent breakpoints again before committing or flashing a "release"...