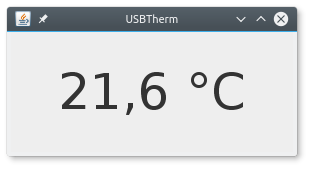 This project is about writing a basic but complete Linux kernel USB driver module together with a simple, programmable USB device to test the driver and have something to play with. It includes a schematic and a PCB layout, and a simple Java desktop application.

The intention for me was mainly to get an understanding of how a Linux driver module looks like and how it works, how a kernel module is automatically loaded when a hardware device is connected to a PC, and how a device file is created, allowing an application to communicate with the device.

It is great fun! The Linux kernel is just awesome, it all works so well.
I however had to spend quite some time to read documentation and put together this basic USB driver looking at other drivers and examples out there, so I thought it is maybe interesting for someone if I share it here.

If you think a USB thermometer is just too simple, have a look at WeatherPi.

The USB 1.1 thermometer is based on an 8 bit AVR microcontroller like the well-known ATmega328P and the V-USB firmware-only USB implementation. Of course, the 328P is overkill for such a simple application, a smaller one will do as well as long as V-USB runs on it.
The temperature is measured with a TMP36, converted with 16x oversampling and averaged with an exponential weighted moving average, contributing to accurate and stable measurements.

An alternative, i.e. for a USB 2.0 device, would be to use one of the "U" ATmega's like the ATmega32-U2 providing USB 2.0 hardware support and LUFA, a Lightweight USB Framework for AVRs.

The schematic is based on Metaboard and, as well as the PCB, created with KiCad, which is also just awesome. I just needed to figure out to use the "g" key to drag parts and wires, from then I found it very intuitive to use. 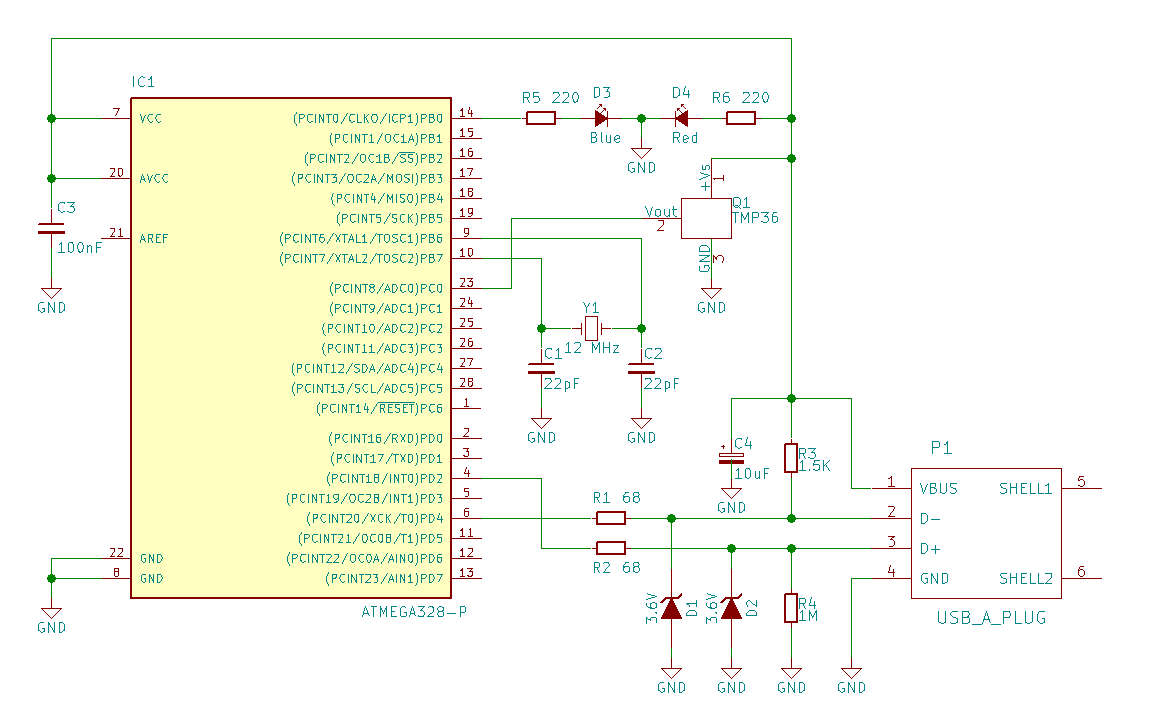 For routing I used FreeRouting, which is also awesome and easy to use together with KiCad. Here is a Maven based fork of FreeRouting.

KiCad's 3D viewer gives a very good idea on how the board is going to look like when designing the PCB:

I've ordered my first 3 PCBs ever from OSH Park, which is super easy, all that needs to be done is to upload the KiCad PCB project and check if everything looks fine. I can't really compare the pricing with other PCB manufacturers, I had a look at a few, but I just didn't feel like filling out a huge form to get a quote. At OSH Park it is as simple as it can be: $5 per sqare inch for 3 two-layer boards with free shipping. The PCBs were produced and delivered to Germany in 14 days and they look great!

Since I was totally unexperienced designing a PCB layout, I made at least some mistakes:

The firmware can be found here.

Besides initializing V-USB and then calling usbPoll() in the main loop, at least the function usbFunctionSetup() must be implemented.
I've implemented just one request CUSTOM_REQ_TEMP, which is a custom "vendor" type status request used by the kernel driver to request the current temperature value, and is returning USB_NO_MSG, so the function usbFunctionRead() is called to actually read the value.
For the function to be called it is also necessary to #define USB_CFG_IMPLEMENT_FN_READ 1 in usbdrv/usbconfig.h.

For an unofficial vendor id, I checked against The USB ID Repository to find one that is not in use and thus no other driver should feel responsible for.

The project contains a Makefile including the targets make to build it and make flash to flash it on the controller.
It is probably necessary to make some settings in there for the programmer being used.
Also, lfuse of the 328P must be set to 0xf7 or 0xff so the crystal is used is clock source.

The Linux driver can be found here.

I enjoyed a lot to get into kernel modules with the very well written Linux Kernel Module Programming Guide, but unfortunately is a bit outdated and it doesn't cover USB driver modules.
For example, there is module_usb_driver(), a helper macro for registering a USB driver, replacing module_init() and module_exit().

The module is registered for one or more USB devices using the macro MODULE_DEVICE_TABLE: After building and installing the module and running depmod -a, the file /lib/modules/$(uname -r)/modules.alias contains an alias for the module:

Now, when the device is connected, the module is loaded automatically.

The file operations device_open(), device_release(), device_read() and device_write() are passed to the struct usb_class_driver which can be used by drivers that want to use the USB major number instead of allocating its own major number: Passed to usb_register_dev(), a usb class device is created in /sys/class/usbmisc/: and a char major 180 device node is created with, on my system, minor number 2:

The probe and disconnect functions are put in the struct usb_driver:

That's basically the whole wiring, all that's left is to implement the functions probe, device_open() and so on.


Reading from the Device

In device_open(), I'm sending the custom "vendor" type status request CUSTOM_REQ_TEMP to the thermometer to get the current temperature value:

The value is later written to the buffer message and can then be read by an application from the device node in device_read().


Building and Installing the Driver

The driver project includes a simple Makefile. Provided that the kernel headers are installed, the driver module can be built with: and installed (as root) with: Then, when connecting the device, dmesg shows that the driver is loaded: The device node is created and the current temperature value (°C x10) can be read from it:

The libusb interface can be found here.

A portable alternative to the Linux kernel driver module. libusb is also awesome and well documented, including the different examples (both linked at the aforementioned page).

The interface is a small executable that first finds the USBTherm device: And then it makes the custom control request to read the temperature value:

Looks very similar to the request in the Linux driver :-)

A 64 bit binary can be found here and can be copied to for example /usr/local/bin.

To allow a regular user to access the USB device, it might be necessary to add a udev rule to for example /etc/udev/rules.d/99-usbtherm.rules: And then reload udev: Running usbtherm should print the current temperature value (°C x10):

A 64 bit binary can be found here and can be copied to for example C:\Windows.

For the libusb interface to work, it is necessary to install a driver for the device. The recommended way is to install WinUSB with Zadig.

The desktop app can be found here.

It really is very simple, basically just a frame with a label displaying the temperature value read once a second. It supports accessing the USBTherm device both via the device file provided by the Linux kernel driver module as well as the libusb interface.

It requires Java 8 and Maven to build: This builds an executable JAR target/usbtherm-ui.jar which takes two optional arguments:

The executable JAR can be found here.

The project contains a little shell script for Linux and a batch file for Windows that can be used to start the app.